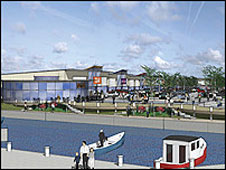 Plans for a multimillion-pound shopping development, which could create 250 jobs, have been given the go-ahead by councillors in Powys.

A Tesco supermarket, five shops and a petrol station are earmarked for the site of a livestock market in Welshpool.

The market is relocating to the outskirts of the town and is expected to open next month.

Plans for the development were unveiled in 2006.

Tesco has plans for other stores in Powys at Machynlleth, Llandrindod Wells and Ystradgynlais, while a supermarket in Newtown is due to open later this year.