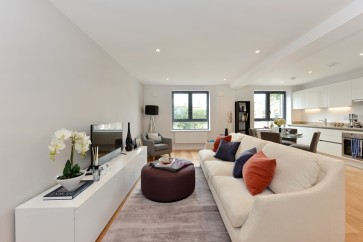 Kensington & Edinburgh Estates has launched its first development to the London residential market.

Standing proud as a design icon the 27 new flats in The Harper Building on Holloway Road in Islington were launched with the official opening of its showcase two bedroom show apartment.

The Harper Building is a visually striking building. Once home to the Harper Piano company who manufactured from this site, the building has been separated into a trio of exclusive apartment blocks offering a range of studio, one, two and three bedroom apartments.

The Dunford Road section of the building was the first to be launched to the public, the remaining two blocks will be completed later this year.

The building itself has an abundance of decorative features popular in its era and offers the best of both worlds, a contemporary modern interior within a beautifully classic building.

Internally the apartments are finished to an extremely high standard, with high specification kitchen units with Quartz worktops and upstands, fully integrated Neff appliances and Villeroy and Boch sanitary ware.

Currell New Homes are the selected agent to market the properties.

Ian Crawt, Director of New Homes at Currell said “Following the launch of the Dunford Road block of apartments we have generated a lot of interest. This is down to the location, specification and uniqueness of this special development.”

For further details on any of the flats or to enquire, please contact Currell on 0207 226 6611, or newhomes@currell.com. More information on the Harper Building and the various flats within, please visit: www.theharperbuilding.com