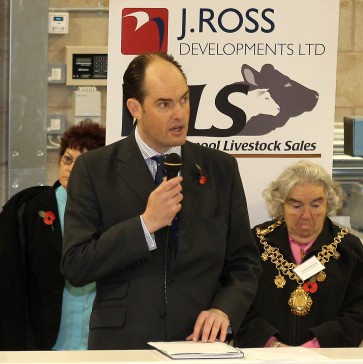 One of the largest livestock markets in Wales was opened today (Friday, Nov 6) at Welshpool, helping to safeguard the future of the rural economy in mid-Wales.

The multi-million pound livestock market represents a significant investment in the rural economy, boosting both Welshpool’s and the UK’s livestock trade.

Built by local developer J-Ross Developments Ltd, part of the Pickstock Group, the multimillion pound new market will safeguard the future of the rural way of life in Welshpool and will support the livestock trade across the UK.

The 149,000 sq ft market at nearby Buttington Cross will replace the smithfield market in the centre of Welshpool, protecting the jobs of 55 existing workers and providing dozens of indirect jobs in sectors as diverse as farming, catering and construction.

The existing market in the town centre will be redeveloped into a new Tesco supermarket, petrol station, shops and houses, revitalising the heart of the town.

The new facility will be owned and operated by Welshpool Livestock Sales and is modern, environmentally friendly and bio-secure by design.

The old market was officially closed and the new facility opened by Chris Dodds, the Executive Secretary of the Livestock Auctioneers’ Association.

“There are several new markets in the United Kingdom that I have visited and I would have to say that Welshpool compares favourably against them all,” he said.

“The investment seen here at Welshpool must be seen as a great shot in the arm for the economic stability of the area..”

John Jones of Welshpool Livestock Sales, said “The new market is an investment in the livestock industry and the rural way of life and will keep Welshpool on the map.

“The market could not have come about without Pickstock Group, which has the expertise and financial resources to manage the development and construction process from beginning to end.

“It is highly appropriate that Mr Dodds has performed both ceremonies.

“As Executive Secretary of the Livestock Auctioneers’ Association, he has played an invaluable role in supporting livestock markets and farmers throughout England and Wales, and in particular he has encouraged the investment in Welshpool at a time when few developers were willing to invest in new livestock markets.

“Welshpool will have a market of which we can be extremely proud, comparable to anything in Europe and capable of serving markets across Great Britain.”

Spencer Cooper, a Director of J-Ross Developments, said: “We are delighted to be launching one of the largest livestock markets in Europe just an
hour after saying goodbye to the old smithfield market.

“This is the result of several years of hard work in partnership with Welshpool Livestock Sales in designing this new facility, which we hope will be a platform for WLS to continue flourishing in the future.

“By freeing up the Smithfield market site, we have been able to create a more sustainable centre for the town through its retail-anchored redevelopment.

“This will help towards reversing a significant loss of trade to this historic town.

“The team has pulled together and worked closely with Welshpool Town Council, Powys Council and local MP Lembit Opik, as well as regional and national politicians to deliver a project that safeguards the future of the regional economy.

“This milestone development will mark an exciting new chapter in the story of Welsh livestock farming.”

Lembit Opik, MP for Montgomeryshire said, “Welshpool’s one day livestock market will be one of the biggest in Europe and it is a crucial link in creating a sustainable production chain for agriculture.

“The development is at the heart of regeneration in the area and will create thousands of jobs in the food supply chain and wider rural economy.

“There were some planning problems but working with the Council I was pleased to play my part in overcoming matters which were frankly less important than the opportunities that the livestock market has created for farming and Welshpool itself.

“The development has been completed on time and with the highest regard for animal safety and bio-security. Farmers have been hit badly this year by Bovine TB and Bluetongue and we owe it to them to do all we can to prevent future outbreaks.

“We are not out of the tough times yet, and I hope that local people and those just across the border in England will support their local farmers by buying local produce at market.
“I’m in no doubt that it will match its previous reputation from the 1530s as the “best market in Powysland.”

Councillor Ann Holloway, Mayor of Welshpool said, “The re-siting of the Livestock Market is the first stage in a very important period for the town of Welshpool.

“Today marks the beginning of the restoration of this lovely, historic market town of which I am so proud, to its former glory.

“A town with a bright High Street where people can come to eat and browse and a place where future generations can live, work and be happy in the knowledge that the new development will be creating job opportunities for so many and providing so many different facilities.”

Councillor Wynne Jones , Powys County Council Board Member for Regeneration said, “I am delighted that the new Welshpool Smithfield has reached the stage where it is operational.

It is a fantastic development not only for Welshpool but for the whole of the region. “It will ensure that the town remains an important agricultural economic area for many years to come.

“It also fits with the overall regeneration of Welshpool; it was the first brick in the wall that led to the plans that are now coming to fruition on the old Smithfield site. It is an exciting time for Welshpool.”

Mick Bates, Liberal Democrat Assembly Member for Montgomeryshire said, “This development recognises the massive importance of agriculture in Mid Wales and the borders. The sustainability of the agricultural economy in Mid Wales has been strengthened by the commitment and investment made in the new market.

“ In an age where food security is of major importance, having an accessible, local market place for local livestock producers safeguards their ability to market their produce and make a living.

“The new market ensures that mid Wales remains significant as one of the busiest markets in Europe and the knock on effect of such trading on other local businesses cannot be underestimated.

“Ultimately, the busy livestock market is key to a robust local economy, it helps us retain jobs locally and by moving from the town centre, an opportunity has been created to revitalise that area for the benefit of a much wider community.

“For these reasons I congratulate the foresight of all those involved in this project which has secured livestock marketing in the area for the next 100 years.
“I look forward to selling my livestock in the new market!”

Glyn Davies, Parliamentary Conservative candidate for Montgomeryshire said, “Welshpool has been the main collecting centre for the sale of Mid Wales livestock for over a century, and the opening of the new Livestock Market will ensure its dominant position will continue for many decades to come.

“The new Livestock Market is part of an exciting redevelopment plan for Welshpool which will bring employment and increased prosperity to the town and surrounding areas.

“ It’s accessible location and purpose built design will attract buyers from far afield, and provide support to the Mid Wales rural economy. I’m certain that the new Welshpool Livestock Market will be a great success.”

Gareth Vaughan, President of the Famers Union of Wales and a local farmer, “Monday is probably the most important day of the week for me and is never complete without a visit to Welshpool Livestock Market – the largest one-day market of livestock in Wales and one of the largest centres for sales of prime and breeding sheep in Europe.

“As a sheep breeder, I look forward to going to the market because it’s where I can keep my finger on the pulse of the industry which is so important for someone privileged to have such an influential position within the Welsh farming industry.

“I have looked forward with great anticipation to this day ever since I first learned that an ultra-modern re-development of the old market site, which I have always regarded as my local mart, was underway.

“That sense of anticipation still remains. I can’t wait to avail myself of the purpose-built facilities provided on the new site.

“It can proudly boast of having all the necessary animal welfare requirements and is well served by trunk road connections. I believe Welshpool mart will continue to attract stock from as far afield as south Ceredigion and beyond.

“And I’m confident that the market will remain a magnet for a large number of buyers for the excellent produce of farms throughout Mid and West Wales. The high quality of their livestock is second to none.

Robert Robinson, Welshpool Town Clerk said, “The opening of the new Livestock Market signals the beginning of the next stage in the development of Welshpool.

“It unlocks the domino effect that will see the start of the town’s new gyratory traffic system and the major retail developments on the old market site.

“These are fantastically exciting times for Welshpool, ensuring economic growth and prosperity for the town and as a town council we have been very impressed by the highly professional approach by the developers, J-Ross Developments.

“The Town Council has had a major role to play in the decision making procedures that have led to the plans coming to fruition and we will now press ahead to ensure the continuing growth of Welshpool.”

“This development will kick start a number of regeneration projects that we are currently helping to deliver, such as refurbishing the Norman castle and the Victorian market, and returning the historic open-air market to Broad Street.”